Ellie Boo Bed & Breakfast has teamed up with Supreme Travel to offer the guests a discount rate on the most popular attraction in Gozo – Hop on Hop off Gozo Sightseeing Tour. The Gozo Sightseeing Tour operates every day (except on Christmas Day). The first bus leaves Mgarr Port, and there’s a bus every 45 minutes. The full schedule can be viewed by clicking here.

The following are the places where you can hop off or pass by during the tour:

1. MĠARR – This is Gozo’s main harbour with its many fishing boats, yachts and ferry boats. Overlooking the harbour is Fort Chambray and the exquisite Neo-Gothic chapel of Our Lady of Lourdes.

2. MARITIME MUSEUM – The privately-owned Kelinu Galea Maritime Museum has a myriad of exhibits, among which one can find rare and priceless articles such as authenticated pieces of timber from Lord Nelson’s ship “HMS Victory”, the “Constitution”, which was the first US warship, as well as one of Lord Mountbatten’s gold epaulettes which he wore during the period of duty in the Mediterranean.

3. RAMLA BAY – The beach is located at the bottom of a rich and fertile valley on the northern side of the Island. It is quite wide and sandy. It’s a particularly golden-reddish sand which makes this beach different from all others in Gozo and Malta. Its real Maltese name is Ir-Ramla il-Ħamra – the Red Sandy Beach.

4. SAVINA CREATIVITY CENTRE – A location run by the master franchise for a country or a geographical area, having facilities to produce fresh delicacies, stock merchandise, train staff, customise gifts and organise distribution.

5. ĠGANTIJA TEMPLES – Regarded to be the oldest free-standing structures in the world, the largest megalith to be found at Ġgantija Temples weighs about 50 tonnes, and its walls reach a height of around seven metres. Altars and the remnants of a fire-reddened circular stone-hearth, possibly for an eternal flame, can still be seen. TA’ KOLA WINDMILL – One of the landmarks of Xaghra to be seen from afar is the Windmill of Ta’ Kola, lying a few scores of metres away from the Church to the north-west and a walking distance away from the Ggantija Temples lying to the South. It lies on the highest point on Xaghra plateau and acquired its name after Nikola or Kola (in short) Grech, the miller who took it over early in the 20th Century.

6. CALYPSO CAVE – The location of Gozo’s most popular legend is in a cave at the end of this ridge. Calypso, daughter of Atlas, entertained Odysseus for seven years until Hermes, the messenger of the gods, was sent by Zeus to bid Calypso to release the Greek hero.

7. MARSALFORN – In the year 60 AD, the Christian Apostle Paul was shipwrecked on Malta and stayed on the mainland for three months. Legend has it that on the way to Rome from Malta, his ship stopped over in Marsalforn. Today, this is a popular seaside resort.

8. VICTORIA – Due to the narrow streets, it is not possible to drive to the Citadel, but it is only a short walk away. As one of the highest points on the island, historical evidence shows that the Citadel has been fortified for many centuries. The town of Victoria, locally known as Rabat is certainly worth a visit.

9. TA’ PINU SANCTUARY – Every year, many pilgrimages are made to the Basilica of Ta’ Pinu. Our Lady of Ta’ Pinu is believed to have miraculous healing powers. Ex-voto offerings, including silver objects, crutches and pictures are displayed in the church.

10. TA’ DBIEGI CRAFTS VILLAGE – Situated beneath the shelter of Gozo’s highest hill, huts and workshops furnish local unique handmade crafts such as the famous Gozo lace, sweaters, blown glass, pottery and ceramics, limestone, marble, onyx and alabaster, silver and gold, paintings and wood pyrography, leather, Tinsmith, candles and also local liqueurs, honey and preserved dried fruits in the traditional way. One can feel free for a one-stop shop and relax for a while at the cafeteria /restaurant and enjoy the nice and quiet Gozitan countryside atmosphere.

11. DWEJRA – One of Gozo’s most important natural landmarks is the stunning area known as Dwejra and includes the Azure Window, the Inland Sea, a coastal tower and the famous Fungus Rock.

12. FONTANA – It is a village with a population of 846 people. Fontana originated from the suburb of Victoria on the Rabat-Xlendi road. Its local name is “Triq tal-Ghajn”, (the way to the spring), and it took its name from a spring at the bottom of the road leading to Xlendi, known locally as “il-Ghajn il-Kbira”, (the big spring). Fontana is Italian name for a spring.

13. XLENDI – For centuries, Xlendi was a quiet fishing village. While this tradition continues today, it has also become a popular seaside resort with a number of small hotels, restaurants and nightclubs.

14. VICTORIA BUS TERMINUS – Until 1637, Gozitans were bound by law to spend the night within the Citadel, but after this, the surrounding area became a popular place to live. Late during the Arab period, this town became known as Rabat. Since the Jubilee of Queen Victoria of the British Empire in 1887, its official name became Victoria although it is still referred to locally as Rabat.

15. XEWKIJA – Situated between Ghajnsielem and the capital town, Victoria. The name is derived from the Maltese word “Xewk”, meaning “thistles” or “thorns”. Xewkija is famous/very well known for its majestic church, The Rotunda, which is dedicated to St. John The Baptist. It replaced an older church. This church is the Seat of the Knights of the Order of St. John. It was built from Maltese stone by local masons and craftsmen. It is the largest in Gozo and its dome dominates the village.

To book a sightseeing tour, please email ellieboo@bbgozo.com or see our Contact Us page for more ways to get in touch. 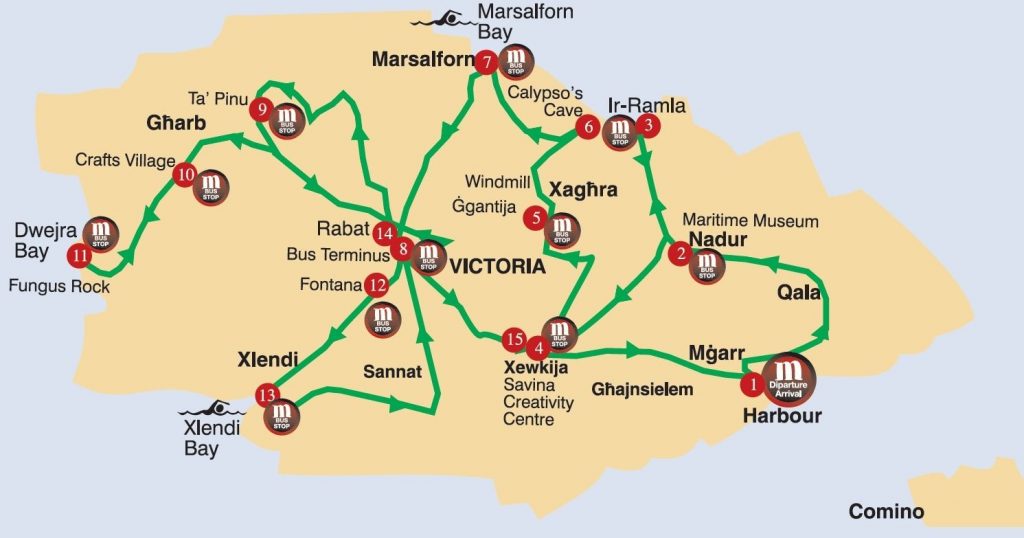